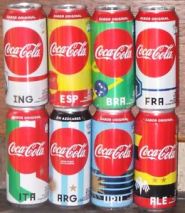 Apparently, there’s some sort of football competition going on out in Russia.  England could easily win it, all they have to do is field the women’s team instead of the men and the trophy is as good as ours. Whatever the outcome of this quaint-but-hugely-profitable tradition, of course, the real winners are almost certain to be the marketers and those smart brands that cleverly associate themselves with the world’s largest sporting event in true Pavlovian style.

As the competition gets underway, it’s worth pausing to give special mention to Coca Cola, the World Cup’s longest-standing corporate partner. This is a company that really understands the concept of conditioned emotional responses. Just as Santa’s red suit and the lorry travelling the country have become firmly fixed in our Christmas psyche, so the World Cup affords another opportunity for Coca Cola to associate its brand image with the excitement and anticipation of a truly global sporting occasion – with global TV audiences to match, of course.

Whether in India, China, Turkey or the USA, 70% of TV viewers will place Coca Cola top of their league when asked to list the first brands that spring to mind after a game, with Classic Coke itself as the most-recalled product. Only Adidas comes vaguely close to catching up with the famous red cans among World Cup audiences.  An investment worth every penny for the world’s number one soft drinks brand. And of course they have the creative campaigns in place to fully exploit this powerful association.

Logos on cans, limited edition products, branded songs… you name it, it’s there. A text book case study of effective sponsorship collateral for any marketing course.  Worth special mention, if only because of my long-standing love of the c-store sector, is the partnership with 7-Eleven that brings special promotions and pricing to over 61,000 small retail outlets worldwide – a more significant alliance for Coca Cola than with any larger supermarket chain.

My own personal favourite, though, has got to be the team-branded cans. Just as the named bottles encouraged us to “be social” in our Coke drinking a short while ago, becoming one of the most successful campaigns of all time bar Santa Claus, so the chance to drink the real thing from your own team’s can seems set to steal the show as the true competition-winner of Russia 2018.  Inspired!